Welcome to the Canterbury Resources investor centre. Here you will find the latest ASX announcements, news, reports and share information.

Canterbury Resources Limited (ASX: CBY) is an emerging mineral exploration company that was formed in 2011, with the aim of generating Tier-1 opportunities in the southwest Pacific region in a cost-effective and responsible manner. The Company is managed by an experienced team of resource professionals, with a strong track record of exploration success and mine development in the region.

A strong portfolio of porphyry related copper-gold projects has been established in Papua New Guinea and Australia and is being steadily advanced in partnership with industry leading groups to defray risk. The scale of assets being explored provides very high leverage for investors.

In PNG, Canterbury holds three projects; Wamum and Ekuti Range on the mainland, and Bismarck on Manus Island.

PNG is renowned for its abundant mineral wealth, including world-class copper and gold assets. The country’s unique geology largely results from its position on the interactive plate tectonic boundary between the cratonic Indo-Australian plate to the south and the oceanic Pacific Plate to the north. Since the Cretaceous, uplift and deformation have occurred due to the collision between these plates. 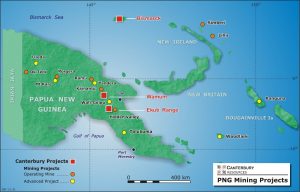 At the Wamum Project, a Scoping Study is being undertaken to assess the merits of a standalone operation based on two deposits: Idzan Creek (137.3Mt at 0.53g/t Au & 0.24% Cu) and Wamum Creek (141.5Mt at 0.31% Cu & 0.18g/t Au). In parallel, scout drilling is proposed to further assess porphyry copper-gold mineralisation systems at the Bismarck and Ekuti Range projects. The Bismarck Project is being managed and sole-funded by Rio Tinto Exploration (PNG) Limited as part of a Farm-In and Joint Venture Agreement.

These adjoining tenements are located inland from Gladstone, at the southern end of the northwest-southeast trending Mt Morgan structural belt. The high-grade Mt Morgan mine produced around 8Moz of gold and 350,000t of copper before its closure in 1989. The potential to delineate an economic project in this region is enhanced by its accessibility to critical infrastructure, including power, transport, industrial services and skilled labour.

A significant resource has already been outlined at the Briggs deposit (142.6Mt at 0.29% Cu) with further drilling planned to boost tonnages and assess higher grade features.

In Vanuatu Canterbury holds a Prospecting Licence (PL 1851) plus an application on Santo. These assets are in the process of being sold to New Talisman Limited (ASX: NTL).

The Bismarck Project is currently being managed and sole-funded by Rio Tinto Exploration (PNG) Limited as part of a Farm-In and Joint Venture Agreement.

2022 could be the start of something big…at Briggs

RaaS has reviewed the Company’s recent activities and plans for 2022, highlighting excellent progress at the Briggs Copper Project and exciting growth plans for 2022.

Watch an interview of MD, Grant Craighead, outlining CBY’s 2022 plans, including a follow-up of the recent successful drilling program at the Briggs Copper Project in Queensland.

Briggs Ready to Rig Up

A Step Forward at Briggs

Watch an interview of MD, Grant Craighead, following the announcement of a strategic placement in Canterbury by African Energy, as well as an associated earn-in and joint venture deal aimed at accelerating exploration at the Briggs copper project in Queensland.

Canterbury’s MD, Grant Craighead, recently presented at the ASX Small and Mid-Cap Conference 2020. The presentation and an associated media interview are available at the following links:

Canterbury is pleased to release very encouraging results from its soil sampling program at the Briggs Copper Project in Queensland. Download the report here.

The Board of Canterbury Resources Limited has released its Quarterly Report for the period ending 31 March 2022: Download Here

The Company is managed by an experienced team of resource professionals, with a strong track record of exploration success and mine development in the region. Combining technical, operational, corporate and legal expertise in the metal and mineral exploration, finance and development, the Canterbury team aims to create shareholder value, whilst maintaining strong corporate governance.