In Vanuatu Canterbury has 100% of two Prospecting Licence’s on Malekula (PL’s 1836 and 1837), plus five PL applications on Malekula and Espiritu Santo. Sporadic exploration in Vanuatu has encountered widespread epithermal gold-silver and porphyry copper-gold mineralisation, and Canterbury’s tenements and applications cover many of the key historical prospects.

Strategic tenements have been established over a series of historical gold prospects, and Canterbury has completed several mapping and sampling programs.

Our applications include the Fundor and Tafuse prospects where historical exploration has identified exciting ‘drill-ready’ targets. 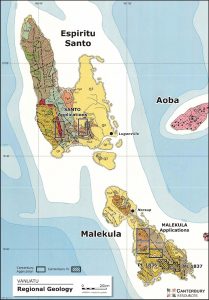 Exploration by Canterbury is at a relatively early stage. Field work has comprised several reconnaissance mapping and sampling campaigns focussed on the Taoran, Amethyst and Barius prospects where encouraging historical results have been reaffirmed by Canterbury.

The Amethyst Prospect in PL1836 was originally identified from amethystine quartz float in rivers. It has been evaluated by several explorers, including City Resources (1986-1987) that recorded bench sampling results of 5 m at 7.0 g/t Au, 5 m at 7.5 g/t Au and 5 m at 6.4 g/t Au, and Vanaust Minerals Ltd (1991) that drilled nine shallow holes in a small area proximal to a trench with exposed amethyst veins. The Vanaust drilling encountered eleven narrow gold bearing intercepts (>1.0 g/t Au), albeit core recovery was reportedly poor.

The Barius prospect in PL1837 comprises a 2km long northwest-striking alteration zone which coincides with a magnetic low and a potassic radiometric anomaly. Gold-silver-zinc mineralisation is associated with clay alteration, brecciation and quartz vein stockworking.

Canterbury has assessed historical data for its various application areas, identifying several promising targets. At Fundor on Espiritu Santo, base metal-gold mineralisation is hosted by volcanoclastic sediments and limestone within a 1200m by 900m alteration envelope comprising pervasive argillic alteration and propylitic-phyllic alteration. Several styles of base metal and/or gold mineralisation are noted. The Tafuse prospect, located 1.5km northwest of Fundor, is localised by the same northwest trending structure. Epithermal style gold-silver-basemetal mineralisation occurs within a 1000m by 500m alteration envelope within volcanics that are intensely hydrofractured and argillically altered.

Canterbury considers the geology, structural setting and styles of mineralisation on Espiritu Santo and Malekula analogous to the gold and base metal deposits and prospects of the Hauraki province in the Coromandel Peninsular of New Zealand. The Hauraki Province has been a gold-silver-base metal producer since the mid-1800s and has produced more than 10Moz gold. Modern exploration since the early 1980s has led to a comprehensive understanding of deposit characteristics and controls on mineralisation. Canterbury proposes to apply this knowledge in its exploration strategies in Vanuatu.